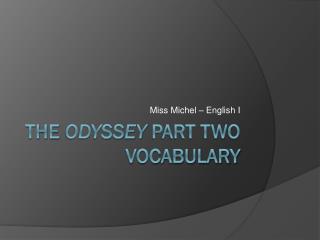 Miss Michel – English I . The Odyssey Part Two Vocabulary . During life we face different adversities. . Adversities (plural noun). Adversities (noun) – great misfortunes; hardships “I am at home, for I am he. I bore adversities , but in the twentieth year I am ashore on my own land.”. vocabulary The Odyssey Part I

The Odyssey Vocabulary - . part i and part ii mrs. leach and mrs. flatt. part i. plunder: (verb). definition: to take

The Odyssey Vocabulary - Opening invocation and books 9-12. the odyssey vocabulary. be sure to note the following the

Odyssey Vocabulary - . part i. v. to gather, summon, rouse the young boy mustered up courage to show his mother his

Odyssey Vocabulary - . guile. n. crafty or artful deception, the use of tricks to deceive someone odysseus demonstrated

Vocabulary Unit 2 Part 2 of Odyssey - . english ib. 1. incredulity. noun the state of being unable or unwilling to

The Odyssey by Homer Vocabulary - . invocation (7). invocation: (noun) the act or process of petitioning for help or

The Odyssey, Part I - . pg 1042. objectives:. identify the elements of epic heroes use background and prior knowledge to

The Odyssey Vocabulary: PreAP /IB - . abominably [adverb]. doing something in a way that is worthy of or causes disgust

Vocabulary List 3: The Odyssey - . by emily, zach, makayla, and josh. quiver. definition: (noun) a case for holding or

Odyssey: Part 3 - . what does an epic reveal about its culture?. warm-up 1. between you &amp; your elbow buddy,

Odyssey Part 1 - . plundered : (v) to rob of goods or valuables by open force, as in war, hostile raids, pillage

Part 2 of The Odyssey - . this suitor begged odysseus not to kill him and offered odysseus money, gold, and gifts. . who

Part II of The Odyssey - . back in ithaca point of view: literary element throughout part ii:. father and son. how does