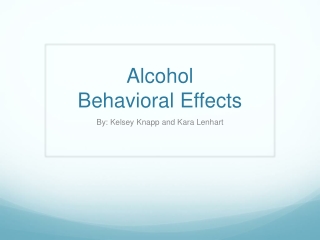 Alcohol Behavioral Effects. By: Kelsey Knapp and Kara Lenhart. History of Alcohol. Alcohol beverages have been traced back through history as far back as 4200 B.C. The Effects of Alcohol - . long terms effects of abuse. alcohol is addictive abuse can lead to damage to the: liver,

Alcohol use and its effects

Alcohol Effects, Affects or both? - . how alcohol influences y - o – u!. alcohol is classified as …. a drug illegal

Harmful Effects of Alcohol Use - . did you know that the harmful effects of alcohol could be triggered by an interaction

Alcohol Effects On Your Eyes - Excessive alcohol affects human eyes as well; it creates a distorted and blurry vision. a