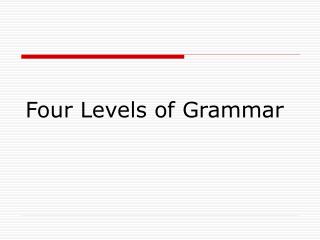 The grammar gap - . dick hudson liverpool february 2010. plan. grammar in a normal world how we got our grammar gap

Focus On Grammar Reference and Practice - . how to use the program levels 2 – 5. fullerton college skills center. what

“On the Teaching and Learning of Grammar: Challenging the Myths” - . by diane larsen-freeman. grammar structures have

Linguistics and Grammar - . esol praxis – session #2. aspects of language. here is an illustration that shows an

Four Levels of Grammar - . mrs. malic 8 th grade. what is grammar????. grammar is a way of thinking about language!!!

Grammar Unit Review - . directions. this game is played jeopardy style. each category is based on popular young adult

Teaching English Grammar - . education 453:10. were you ever taught the rules of grammar? (rate yourself using a likert

Grammar &amp; Punctuation - . a revisit. resources. a grammar companion for primary teachers by beverly derewianka if

Linguistics and Grammar - . esol praxis – session #2. aspects of language. here is an illustration that shows an

Advanced Syntax - Lecture 12: universal grammar. advanced syntax. in looking at english data, we have been building a