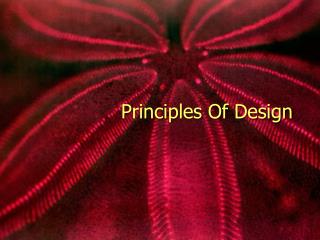 Principles of Parallel Algorithm Design - . carl tropper department of computer science. what has to be done. identify

Knes 300 - Principles of Human Movement - . course objectives 1) learn about the relationship between mechanical

PRINCIPLES OF DESIGN - . are the directions, guidelines, or formulas for using the elements of design. what are the