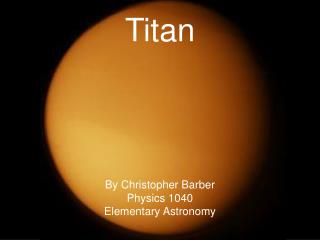 Titan. By Christopher Barber Physics 1040 Elementary Astronomy. Introduction to Titan. Titan is one of numerous satellites that orbit the planet Saturn. Titan is also the largest of Saturn’s moons as well as being the second largest moon in our solar system (after Jupiter's moon Ganymede.) Spam Titan - Creating your spam titan account. the first day that spam titan is set up, you will receive your first