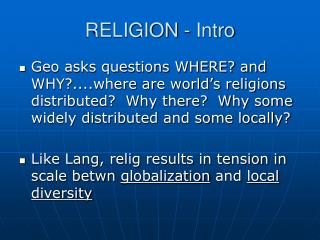 RELIGION - Intro. Geo asks questions WHERE? and WHY?....where are world’s religions distributed? Why there? Why some widely distributed and some locally? Like Lang, relig results in tension in scale betwn globalization and local diversity. Global/universalizing V. Local/ethnic religions.

- Introduction to African Religions John S. Mbiti - “people draw and paint pictures or make carvings of their idea of

Intro to World Religions - . why is there religion?. paint by french artist paul gauguin title: where do we come from?

Intro to Hinduism - . the world’s oldest religion?. key questions: hinduism. where did hinduism originate? who founded

Islam (Intro Video) - . sol whi. 8. muhammad. born around 570 ce in a town called mecca. considered to be the greatest

Ethics &amp; Religion - . phi 251 – intro to ethics. does morality depend on religion?. socrates asks a religiously

Introduction to Studying World Religions - . from within a catholic context. catholic social teaching on world religions.

What is Religion? - . what are some examples of different religious beliefs found throughout the world?. what role does