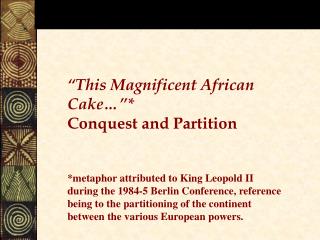 The European Conquest and Colonization of the Americas - . five nations started colonies in the new world. spain – in

African Tribalism - . how people are related in traditional african society?. kinship: means a relationship that binds

SOVEREIGNTY AND PARTITION 1912 TO 1949 - . leaving cert history. ireland at the start of the 20th century. ireland and