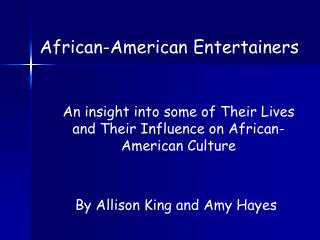 African-American Entertainers An insight into some of Their Lives and Their Influence on African-American Culture By Allison King and Amy Hayes Sidney Poitier Actor 2/20/1927 - ???

Chapter 24 African Americans at the Dawn of a New Millennium - . i. progress and poverty. civil rights progress has led

Famous people in America - . b eginning. in america, a lot of famous people. we would like to tell you about them.

10.5 African American Culture - . i. the harlem renaissance. a. the major movement of african americans from the south to

My Actor’s Scrapbook 2011 - . starring: maddison hodder. when i come into the theatre i get a sense of security. i love

Postwar America - . popular culture of the 1950s. the new mass media. the rise of television popularity during wwii