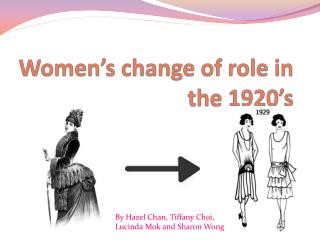 Women’s change of role in the 1920’s. By Hazel Chan, Tiffany Choi, Lucinda Mok and Sharon Wong. How did WW1 change women’s role in society?. When war started, women started to work outside their homes. (as shipment collectors, accountants, telephone operators…etc.) The Role of Women in the Church - . the proper role of men and women in situations that involve leadership. the contrast

The Role of Women in Islam - . rights &amp; responsibilities. agenda. who makes up the rules in islam? equity

Women in Canada in the 1920’s - . by 1918 all canadian women can vote in federal elections. however, women are still

The Role of Women - . women’s role before industrial revolution. women were not allowed to: - vote - hold public

Relate a dream you had recently. - Sampson describes women as being “the weaker vessels.” consider the role that

Do Now. - Do now. define: suffrage temperance movement explain the difference between reformers and radical reformers.

Women’s Role in BDD - . for bdd ?. how do we tap women’s talent energy instinct biological role social roles. why