The role of women within Nazi Germany - PowerPoint PPT Presentation 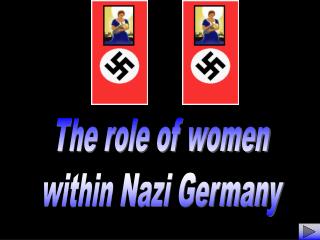 The role of women within Nazi Germany The role of women within Nazi Germany

Women in Nazi Germany - . kinder, kuche, kirche children, kitchen and church. “her world is her husband, her family,

Chapter 24: The West Between the Wars, 1919–1939 - The peace settlements at the end of world war i combined with severe

Bellringer - . read the article on adolf hitler. then write a reader response journal : include at least one quote

Women in Nazi Germany - . the mission of women is to be beautiful and to bring children into the world. the female bird

Introduction to WWII - . adapted from http://worldhistory.pppst.com/ww2.html. during world war ii, many women took over

Life in Germany 1919-1945 - . why were german people optimistic after wwi?. abdication of kaiser. new democratic

Society and Economy in Nazi Germany - . part one women in nazi germany. aims of the lesson. by the end of this lesson you

Wartime Germany revision - . by the end of this lesson… understand how the lives of civilians were affected by the war.

Hitler and His Views - . 24.3. hitler and his views. adolf hitler’s ideas were based on racism and german nationalism.

The Holocaust - . chapter 32, section 3. the holocaust begins. hitler knowingly tapped into a hatred for jews that had

Warm Up - . watch the clips from mona lisa smile , as you watch think about: what has changed today? what has stayed the