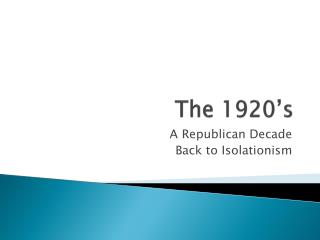 Fads and Heroes of the 1920’s - . by ryan hembury and matt ring. the fads and heroes both played a factor in the

Fads of the 1920s - . dance marathons. miniature golf. crossword puzzles. mahjong. what are these?. radio broadcasting.

Inventions of the 1920’s - . the first modern decade. electricity was brought into the homes of the majority of