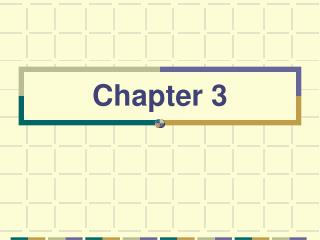 Chapter 3. Solving Problems by Searching. Reflex agent is simple base their actions on a direct mapping from states to actions but cannot work well in environments which this mapping would be too large to store and would take too long to learn Hence, goal-based agent is used.

Chapter 3 - . use cases. use case — an activity that the system performs, usually in response to a request by a user

Chapter 3 - You are the driver. chapter 3. instruments, controls, and devices-3.1. instrument panel tachometer-indicates

Chapter 3 - . part 2. consonance and dissonance. intervals that are treated as stable and not requiring resolution are

Chapter 3 - . chemical bonds. the noble gases. noble gases: do not participate in chemical reactions – they are inert,

Chapter 3 - . when temperatures rise in the spring, the ice begins to melt on bow lake at banff national park in alberta,

Chapter 3 - . what is money?. in economics the idea of what constitutes money is something we want to be careful about.

Chapter 3 - . brand positioning. “it is better to be first in the mind, than be first in marketplace” al ries