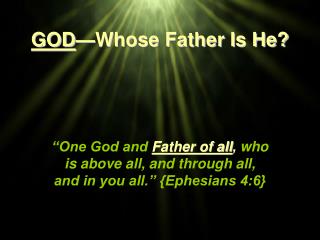 GOD —Whose Father Is He?. “One God and Father of all , who is above all, and through all, and in you all.” {Ephesians 4:6}. Introduction. Many claim that GOD is their Father. How can we validate such a claim? Because they believe in God? Because they are religious? We Believe in God: The Father - . god, father and creator the god of our faith general audience of july 24, 1985 god who

The Person I Admire - . professor charles kao kuen is known as father of fibre optics. he was born in shanghai on

How Today’s Students Are Different Than Those Who Went Before - (This Is Not Your Father’s Classroom) - . terri m.

Lesson 15 The Creation - . built on a rock unit 4: one god in three persons. the apostles’ creed. i believe in god the