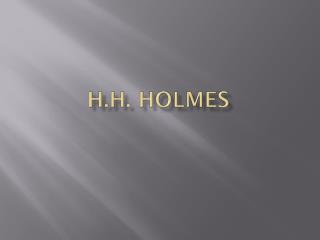 H.H. Holmes. Childhood. Born in Gilmanton, New Hampshire, under the name of Herman Webster Mudgett . Father was an alcoholic, and his mother was a religious woman, who read him the Bible. Justin Holmes - . meaning: just, fair favorite quote: every story has an end, but in life every end is just a new

Catherine Holmes - The right prescription a call to action on the use of antipsychotic drugs for people with dementia.

Sherlock Holmes - . the story of the creeping man. can you solve the mystery?. a man goes into the bar. he says something