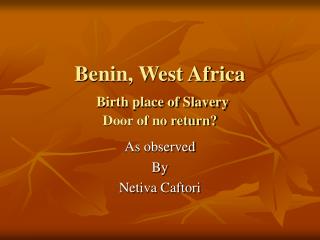 Africa Test Review Game! - . which of the following statements is true about the population of africa? a. contains half

Experience Africa - . west of the land of izania. welcome to the sunny side of africa. nigeria. benin. togo. niger. mali.

Slavery in America - . from colonial america to antebellum u.s. earlier forms of slavery. slavery existed in many places

Ancient Civilizations of Africa - . west africa  a) ghana b) mali c) songhai. a) ghana: their greatest achievement was

Ancient Civilizations of Africa - . west africa  a) ghana b) mali c) songhai. a) ghana: their greatest achievement was