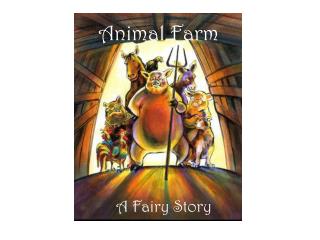 Animal Farm. A Fairy Story. Who was Napoleon‘s propagandist? Squealer Who was the cynic who never changed? B enjamin Who tested Napoleon‘s food for poison? Pinkeye. Who was the farm‘s poet and songwriter? Minimus

First Aid - . chapter 14 bites and stings. animal bites. 1 in every 2 americans will be bitten at some point buy an