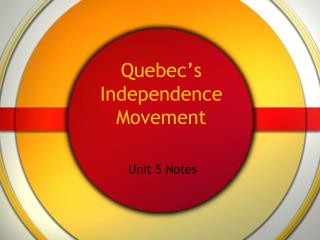 Quebec’s Independence Movement. Unit 5 Notes. Quebec. The Province of Quebec. Located in eastern Canada Large part of Canadian industry is centered in Quebec Many electronics and computer factories are based here French is the official language of business and government in Quebec

6.1 A Nation Declares Independence - . a call for independence. the colonists were divided only about 1/3 took either

Getting to the HEART of the Quebec Student Movement, and mobilization in general - . keynote address by rushdia mehreen

Indian Independence - . india became independent in 1947 indians had been fighting steadily for independence since the 19

Objectives - . explain what motivated the indian independence movement after world war i. analyze how mohandas gandhi

How did these independence leaders win independence for their countries? - Simon bolivar miguel hidalgo toussaint

The Indian Independence Movement, to 1947 - . the land and the people . despite periodic famines due to drought,