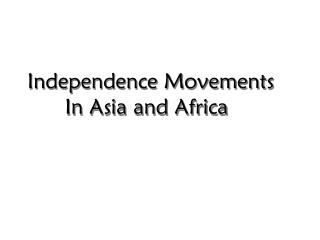 Independence Movements In Asia and Africa Independence Movements In Asia and Africa. Document-Based Question:. Evaluate the methods and roles of leaders and organizations in the movement for independence and change in the period between 21945 and 1975. Document #1. Who wrote it When written Why written Intended audience POV.

Independence Movements In Asia and Africa