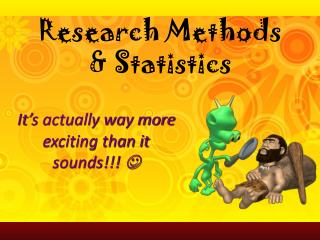 Research Methods & Statistics. It’s actually way more exciting than it sounds!!! . Why do we have to learn this research stuff?. Psychology is first and foremost a science… …So it is based in research. Applied Research has clear, practical applications. YOU CAN USE IT!!!.

Research Methods - . ap psychology mr. basich. research methods: objectives:. by the end of this chapter, i will be able