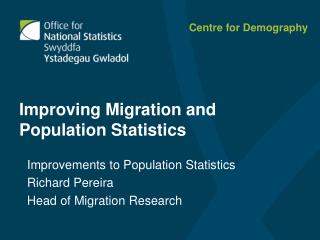 Population and Migration - . warm up question. what are the top 10 most populous countries in the world?. top 10

Statistics - . statistics. our objective today: learn about statistics and why they are important explore how we can gain

MIGRATION - . a permanent or semi-permanent change of residence of an individual or group of people. page 157. balance

Data on International Migration and the Foreign-Born Population from the U.S. Census Bureau - . elizabeth m. grieco

What is migration? What types of migration exist? Legal, illegal, irregular migrants; refugees; labour migration. - What