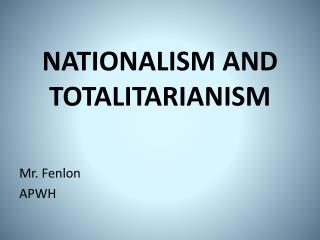 NATIONALISM AND TOTALITARIANISM. Mr. Fenlon APWH. 19th CENTURY NATIONALISM. PATRIOTISM ROMANTICISM JOHANN HERDER AND THE VOLKSGEIST THE RISE OF THE NATION-STATE AND THE DECLINE OF EMPIRES. THE “ERA OF UNIFICATIONS” BISMARCK AND GARIBALDI VON RANKE, NIETZSCHE, AND SCHOPENHAUER. Unit 5 and 6 Questions - . global 9 review myers. “to him who wishes to follow me, i offer hardships, hunger, thirst

Totalitarianism - . fascism ultimately becomes a term to describe governments that

Quebec Nationalism - . duplessis era. from 1936-39 and 1944-59 quebec was controlled by premier maurice duplessis and the

Era of Good Feelings - . james monroe. era of good feelings. after the war of 1812, a mericans had a sense of national