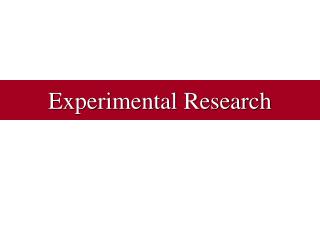 Experimental Research. What is an Experiment?. Research method in which conditions are controlled so that 1 or more independent variables can be manipulated to test a hypothesis about a dependent variable . Allows evaluation of causal relationships among variables 1. Preprocessing of FMRI Data - . fmri graduate course october 22, 2003. what is preprocessing?. correcting for

Experimental Design and Modeling in Aquaculture - . school of marine and coastal sciences, quelimane , mz. we will cover