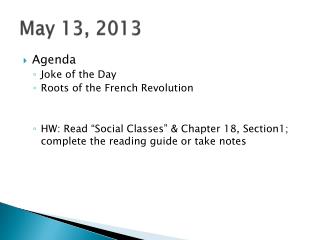 May 13, 2013. Agenda Joke of the Day Roots of the French Revolution HW: Read “Social Classes” & Chapter 18, Section1; complete the reading guide or take notes. “Man was born free, yet everywhere he is in chains.” -Rousseau, Social Contract. May 13, 2013 - Aim: how did russia and the former east bloc countries meet the challenges of post-communist

Monday, May 13, 2013 - . hw: complete idioms handout turn in personal recipe if you finished it over the weekend: final

13 th May 2013 - The 6cs and the patient voice professor juliet beal director of nursing: quality improvement and care.

Science Leadership Network May 13, 2013 - . mobius science center. goals. science leaders will briefly look at the next

May 13 - . focus question: how did rome expand from a republic to an empire? warm up: write your first and last name at