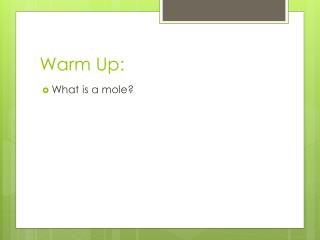 Warm Up:. What is a mole?. Chapter 10: The Mole. Learning Targets: To form an idea of what a mole is. To form an idea of the relationships between, particles, moles, and mass. Distinguish between parts/mass to mols and parts to mass problems. Be able to calculate:

Warm up - . on a piece of paper, each group must list three main things about the maya, aztecs, and inca civilizations.

WARM-UP: Using Context Clues - A context clue is a clue, hidden in the text that surrounds an unknown word or concept.