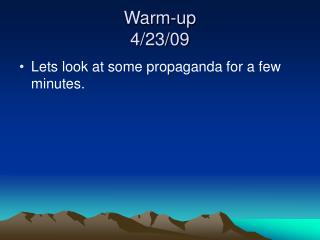 Warm Up 09/04 - . which one of the following is a mixture? a. sugar b. hydrogen peroxide c. concrete d. carbon dioxide.

Warm-up 09/26 - . “satire is a sort of glass wherein beholders do generally discover everybody’s face but their own,

Warm Up 09/17 - . unpack the gps standard s8p1: (write the element in the form of a thinking map). d. distinguish between

Warm Up - . verify that the equation is an identity. trig game plan date : 12/09/13. sum and difference identities

Warm up - . opportunities from using solid alternative fuels in the cement industry presented by peter windmoeller

Warm-up - . determine the equation of this absolute value function. then, give the intervals of increase and decrease and

Warm Up #4 - . write down your 3 (minimum) discussion questions for the article, “justice: childhood love lessons.”.

Warm Up - . describe what the v-t graph would look like for an object with negative acceleration when it starts with a.)