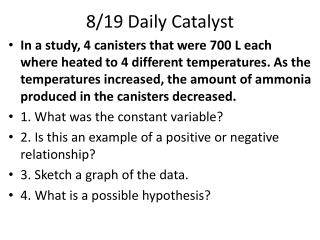 8/19 Daily Catalyst. In a study, 4 canisters that were 700 L each where heated to 4 different temperatures. As the temperatures increased, the amount of ammonia produced in the canisters decreased. 1. What was the constant variable? 2. Is this an example of a positive or negative relationship?

Unit 1 Great Scientists - . a great scientist father of hybrid rice the man who puts an end to hunger. who is he? what is

Implications of the Digital Divide for Education - R. scotty auble and roberta niche 8/19/01 ed 251 introduction to the