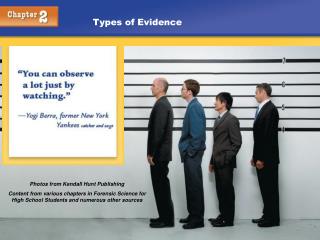 Types of Evidence. Photos from Kendall Hunt Publishing Content from various chapters in Forensic Science for High School Students and numerous other sources. Testimonial evidence is a statement made under oath; also known as direct evidence or prima facie evidence.

Types of Evidence - . direct evidence. firsthand observations made by an eyewitness can be used in court to prove a fact

Evidence across sectors: “delivery” and implementation models. What planet are we on? - Bob banks david kay fd

More on microevolution - . movie (simpsons). evolution evidence. fossil : remnant or impression of organism that lived in

Lecture: Blood and DNA Evidence - . dna evidence . blood at a crime scene: some chemicals produce light when blood is

Evaluating and Integrating Evidence - . a system of thinking about the types of evidence is as follows:. hard evidence

Evidence - . evidence. evidence- something that tends to establish or disprove a fact. testimonial- statement made under

Evidence and Source Selection - . types of evidence and their usefulness. as we saw last class, evidence, facts examples