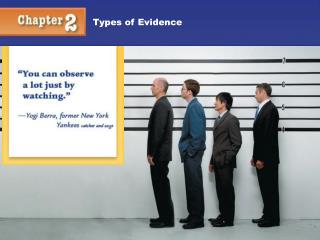 Types of Evidence. Objectives. You will understand: The value of indirect and direct evidence in a court of law. That eyewitness accounts have limitations. What physical evidence can and cannot prove in court. RECAP - . we have looked at the types of evidence as well as the rules governing such evidence concept of