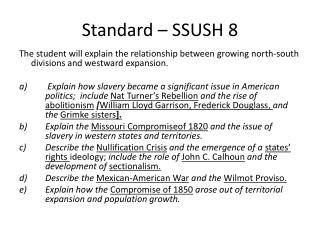 Standard – SSUSH 8 . The student will explain the relationship between growing north-south divisions and westward expansion.

Standard 10: The Thinking Standard - Stretching All Readers with Complex Text - These are the slides that go with my

Standard and Essential Question - . standard - ssemi1 the student will describe how households, businesses, and

Introduction to the ISBT 128 Labelling Standard for Blood Components - . hospital it perspective. what is isbt 128?.

Reasoning and Deduction - . the psychology of human reasoning. the problem of circularity. paradox standard against which

Standard and Transmission-Based Precautions - . standard precautions:. set of rules that were developed by the cdc. under

The Standard Template Library - . some history. the standard template library was developed by alexander stepanov and

Process of a Standard’s Development Following a Standard from Inception to Publication - . dave terruso editor kate