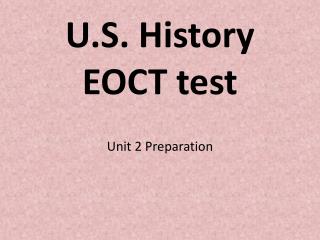 EOCT PREP - . 1)  in an ecosystem, some plants may convert atmospheric nitrogen gas into ammonia through a process

EOCT Review - . biology eoct: may 14 th , 2013. cell structure. what is the difference between a prokaryote and

EOCT Question - . 9 th grade. week 8. suspense is the spice of life. if a person suffering from asthma has determined

Practice Test - . world history ap. which of the following is true of both mesopotamia and egypt?. both were organized

Readiness standards comprise 65% of the U. S. History Test 9 (A) - . supporting standard (9) the student understands the