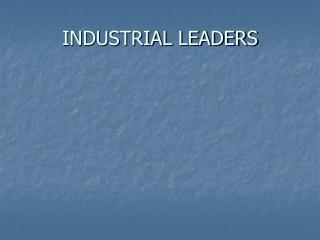 Leaders - . think of people/coaches you have played with or against a c reate a list of… qualities/characteristics of a

Leaders - . using quality assurance principles in emergency planning. task for this afternoon. think about quality in

Leading Leaders Coaching Cell Leaders - . the key behind the cell system is the coach."david yonggi cho, pastor of

Government Leaders - . by coleen caday and georgia gentzen. part 1a- leaders of the government. julia gillard. part 1a-

Rising Leaders - . developing the next generation of community leaders and board members. 2013 southern institute. united