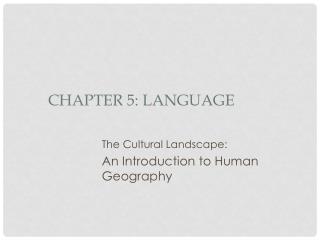 Chapter 5: Language. The Cultural Landscape: An Introduction to Human Geography. Where Are English Language Speakers Distributed?. Origin and diffusion of English English is spoken by 328 million as a first language Spoken fluently by another half billion English colonies

Chapter 5 Language - . upon completion of this chapter. understand how language affects intercultural business

Chapter 5 “Language” - . language: … language is part of culture. religion and ethnicity are communicated through

Chapter 5 - . language choice &amp; code switching. it’s all about…. ‘who speaks what language to whom and

Ch. 5 Key Issue 2 - . why is english related to other languages? indo-european branches origin and diffusion of

The meaning of Language - . chapter 5 semantics and pragmatics week10 nov.19 th -23 rd. this is only a summary. reviewing

CHAPTER 1: WHAT IS LANGUAGE? - . powerpoint by don l. f. nilsen to accompany an introduction to language (8 th or 9 th