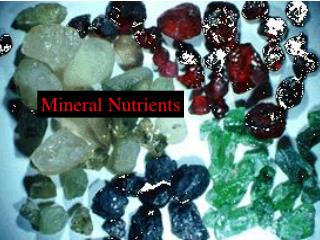 Mineral Nutrients. I. Introduction . A . Definition B . Evidence 1. Julius Sachs Experiment. Fig 37.2. Julius Sachs 1860’s. C. Plant Mineral Compositi on. 1. Incorporation a. As is = Some minerals can be used as is: e.g. K + ions for guard cell regulation

ASSIMILATION OF MINERAL NUTRIENTS - . nutrient assimilation: the incorporation of mineral nutrients into organic EFFECTS OF CHARCOAL, PHOSPHORUS AND NITROGEN ON THE MINERAL NUTRITION OF BANANA - Introduction. figure 1 – general view

Nutrition and Metabolism - . page 493-506. why is food necessary?. a certain fraction of nutrients is used to build

Mineral nutrition - . elements essential to growth and development of plants and the criteria for establishing the

Nutrition in plants - . what do you mean by nutrition ?. the nutrients enable living organisms to build their bodies , to

Plant Nutrition - . chapter 38. plants shoots - above ground roots - below ground dependent on each other. roots would

Model of the Mineral Nutrient Cycle developed by P.F. Gersmehl in 1976 - Soil is the top layer of the earth that is

Chapter 10 – Transport in Plants - . transport in plants. water and mineral nutrients must be absorbed by the roots and

Lab 07 ONLINE LESSON - . use down or up arrows to navigate. do take notes while perusing along…. metamorphic rocks. as