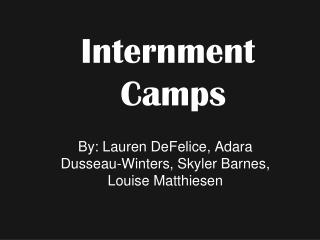 Japanese Internment - . pearl harbor’s impact on the japanese. anti-japanese sentiments have existed in the united

Japanese-American, German-American, &amp; Italian-American Internment And the Holocaust - . what is this image

Japanese Internment Camps - . what happened?. when the japanese bombed pearl harbor, many americans became nervous about

Internment of Japanese Americans - . what kind of hardships did wwii create for americans at home?. concerns about

Internment Camps - . the laurier years had seen a tremendous wave of new immigrants who had been attracted by canada’s

Japanese Internment: The Slippery slope to Genocide - . the examination and analysis of the steps taken by the government

The Internment of Japanese-Americans - . were they loyal? sabotage? did their spies cause pearl harbor? “enemy

The Holocaust - . outcome: healing. constructive response questions. evaluate the efforts made after the holocaust to

5 Best Treks of India - If you love trekking then you should be aware of these amazing adventure camps in india. know