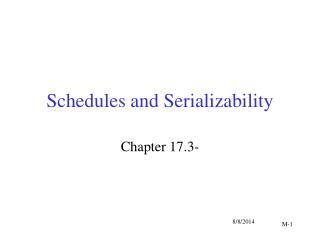 Schedules and Serializability. Chapter 17.3- . Schedules. A "schedule" is the abstraction of the activity of simultaneous transactions. Everything is stripped away except: transaction identifiers (as subscripts) DB READs and WRITEs and the data they operate on COMMITs and ABORTs

Outline of Randomization Lectures - . background and definitions generation of schedules 3. implementation (to ensure

Adult Vaccines - . educational learning objectives. at the conclusion of this presentation, the participant should be