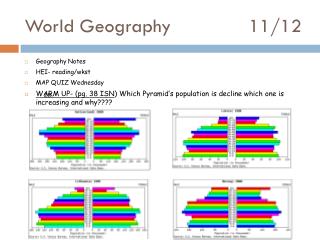 World Geography 11/12. Geography Notes HEI- reading/ wkst MAP QUIZ Wednesday WARM UP- (pg. 38 ISN ) Which Pyramid’s population is decline which one is increasing and why????. Europe. Peninsulas and Islands. Europe is a large peninsula stretching to the west of Asia

Why is Geography Important? - It is an essential intellectual building block for understanding world affairs. now more