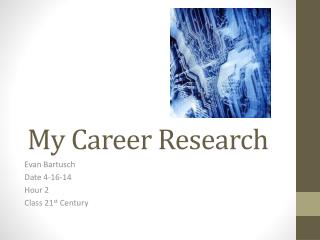 How to Have a Bad Career in Research/Academia - . professor david a. patterson feburary 2002

CAREER PROJECT - . nurse. my career as a nurse. a nurse is responsible for the treatment, safety, and recovery of a

Choosing Your Career - 1. choosing your career. 1.1 jobs and careers 1.2 coping with change and reinventing yourself.

CAREER RESEARCH PROJECT GUIDLINES - . you will research a career that you are interested in pursuing. in your research,

Career Planning - . arlene l. connelly, director of youth services oic of broward county. what are my career goals? how

My Career Research Project - . by: deja williams. why i chose it. the career i chose was to become a pastry chef because