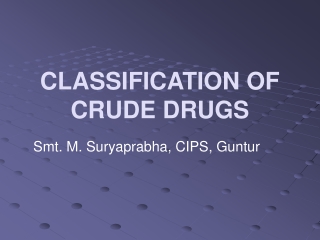 CLASSIFICATION OF CRUDE DRUGS. Smt. M. Suryaprabha, CIPS, Guntur. Crude drugs are broadly divided into the following two main groups on the basis of their apparent morphological forms of cellular and structural organisation -. Preparation of crude drugs - 1. collecting of medicinal plants. suitable time for collectionthe amount of a constituent

Grinding of crude drugs - . regardless of whether the crude drug is to be used for isolation of a pure compound or for

Classification of Drugs - . do now:. there are categories of drugs listed around the room. each of you will receive a

I. Introduction A. Classification of psychotomimetics, psychedelics and hallucinogenic drugs - 31:128 psychopharmacology