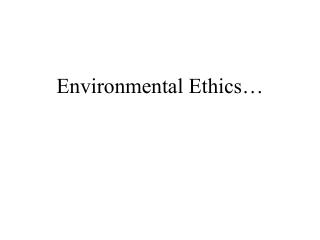 Environmental Ethics…. Learning outcomes. Be aware that environmentalism is an umbrella term. Know the historical context of this debate (enlightenment). Be familiar with of technocentrism and ecocentrism

Ethics and the Law - . computer ethics. a branch of philosophy that deals with computing-related moral dilemmas and