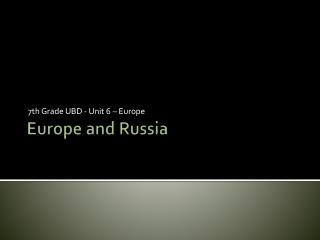 7th Grade UBD - Unit 6 – Europe. Europe and Russia. Main Idea. Europe is a continent with varied geographic features, abundant natural resources, and a climate that can support agriculture. The development of Europe’s diverse cultures has been shaped by the continent’s diverse geography. Demography of Russia and the Former Soviet Union - . lecture 6 sociology soci 20182. new information about the schedule