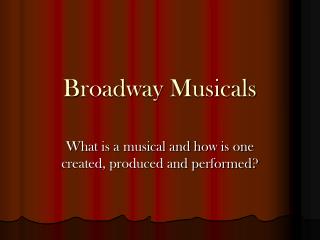 Broadway Musicals. What is a musical and how is one created, produced and performed?. What is a Musical?. MUSICALS!!! - . a brief introduction to the genre…. why musicals?. what makes musicals popular? what makes a good

Musicals - . then &amp; now. back in the day. -musical theater elements go back to greek theater when music and dance

Appreciating Musicals - . musical theater. opera-performance in which all or most of the story is sung operetta-less

4 Musicals - . allie gorman. objective. to design an effective website to inform people of musicals they may or may not

Songs from Musicals - . popular song in context part 4 this presentation summarises the information which can be found in

Broadway - . an introduction to broadway history and culture. what is broadway?. the

Get Original Musicals - Unity musicals aims for the audience to leave the theatre with more than they brought with them.