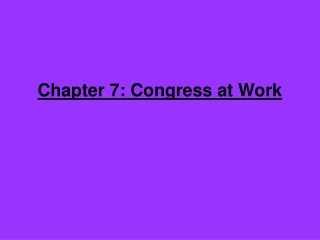 Chapter 7: Congress at Work. A. Bills. Private Bills- deal with individual people or places. Public Bills- apply to the nation as a whole and deal with general matters. i.e.- taxes, gun control, civil rights, health insurance. B. Types of Resolutions. Chapter Five - . the organization of congress. bicameralism. congress is made up of two houses. the senate and the house

Today’s Agenda - . the federal legislature (congress) why do we hate you so much?! why don’t you ever work? how does

Math Congress - . what is math congress?. math congress is a mathematics instructional strategy developed by fosnot and