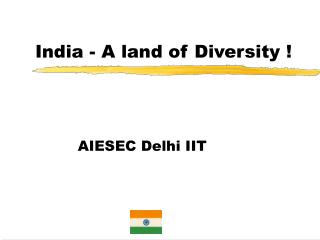 India - A land of Diversity !. AIESEC Delhi IIT. Can you locate India ?. India - Its People. Indians form one-sixth of all humanity. India is also the largest democracy in the world. India. India is the 7th largest country in the world EQUALITY AND DIVERSITY - . eric bater intending trainers ‘ course phase 4i 26 th september 2012. why are we doing

Ancient India and Persia - Chapter 5. ancient india and persia. a subcontinent is a large region of land that is

Cultural Diversity in the Workplace - . analyzing workplace d iversity in gcc countries and its i mplications on

BIODIVERSITY - . definition : the wide range of variations among the living organisms of the world is termed as

Strategies to increase food production Land colonisation, land reform and commercialisation - . starter. what is our