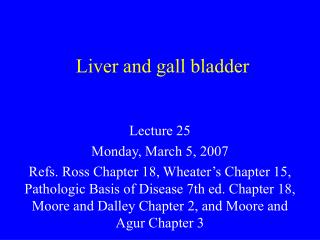 Structure and Function: The Gallbladder - . by benjamin kok and samuel yee. the gallbladder . a small muscular sac that

The Liver &amp; Gallbladder - . the liver has been shown to have m ore than 500 vital functions we will review only a

LIVER AND BILIARY PASSAGES - . dr. mujahid khan. liver. liver is the largest gland in the body its basic functions are