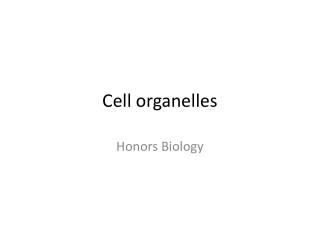 Cell Organelles - . an organelle is a membrane-bound structure that carries out specific activities for the cell. video:

Animal Cell - . extracellular fluid. similar to: water. watery environment outside of the cell all cells in the body are

Cell Organelles - . what are they and how are plant and animal cells different?. section 3.2. nucleus. the brain.

Cells and organelles Methods for studying cells The organelles, their structure and function - . how big is a cell?.

Cell Organelles - . common cell traits. a cell is the smallest unit that is capable of performing life functions .

CELL ORGANELLES - . cell wall. cell wall is strong and is made cellulose wall outside the plasma membrane of plant

Organelles – Who am I? - . parts of the plant and animal cell. organelles. i look like hairs that trap anything trying

The functions of the cell organelles - . cytoplasm. jelly-like fluid that fills the cell. described by felix dujardin.

Cell Anatomy - . chapter 3. objectives. discuss the structure of a typical cell. describe the molecular structure and

Cell parts - . organelles. organelles are the “little organs” or parts of the cell that perform specialized

Cell Structure and Function Chapter 5 - . organelles. there are many small structures located inside the cell. these