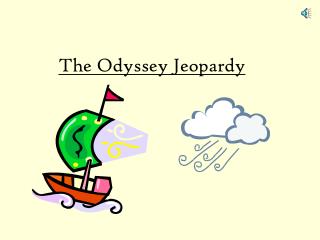 The Odyssey Jeopardy. The ODYSSEY. Final Jeopardy!!. Odysseus had his men tie him to the mast of his ship to resist these creatures. Who are the sirens?. Characters 100. This is a creature who sucks unsuspecting sailors into a whirl pool and then eats them. Who is Charybdis?. Keyboardinging Jeopardy! - . the rules: instructor/host’s decisions are final. and now…here is the host of

CUSTOM JEOPARDY! - . and now, here is the host of jeopardy…. miss sangalli. this is jeopardy!. today’s categories

Welcome - . to. jeopardy!. final jeopardy. round 1. round 2. causes of the civil war. parties &amp; seces-sion.

Once Upon A Time... - Once upon a time. homer told a great story about odysseus. the odyssey. the odyssey is part 2 of

Allusions in the Odyssey - . “why cover the same ground again? ... it goes against my grain to repeat a tale told once,

Background : The Odyssey - . author: homer. everything we know about homer is either traditional, mythical, or based upon