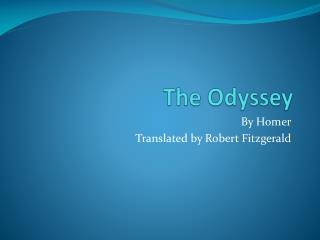 The Odyssey. By Homer Translated by Robert Fitzgerald. Journal. Describe a fantastic voyage you would like to take. Where would you go? What adventures would you have? What changes would you expect to see upon you return?. The Odyssey Background. Background Info: Epics and Values

Odyssey Webquest - . before we jump into this story, you need a bit of background for this epic tale. after all, the

What is the Odyssey? - . the odyssey involves teenagers embarking on a physical journey of several hundred kilometres

The Odyssey - . by homer translated by samuel butler. who wrote the odyssey ?. though homer is the supposed author of

Getting Started with Odyssey Assessment Test Builder - . what do you know about odyssey?. which of these statements are

The Odyssey - . by: kady, emily, taylor, and rachel. muse. definition : noun, a daughter of zeus, credited with divine

The Odyssey Jeopardy - . the odyssey. final jeopardy!!. odysseus had his men tie him to the mast of his ship to resist

Odyssey Lesson - . shared learning target i know that the ancient greeks used myths to explain many values they believed

Warm-Up What are the values of our society Choose a person who embodies these values, and explain to me why they woul

Reaching Students Through The Odyssey: Epithets and Episodic Illustrations - Why teach the odyssey?. themes in the