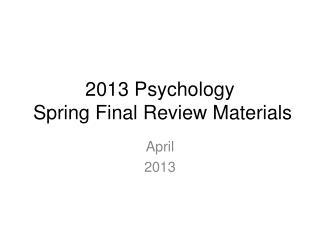 FINAL SPRING REVIEW - . aquarium curiosity. in aquarium, you are curious to see if lowering the ph has an effect on the

Earth and Space Spring Final Review: 2013 - . of what material is the oceanic crust mostly composed? ans: basalt of what

Spring Written Final Review - . what are the parts of an experiment?. observation hypothesis experiment data

Spring 2013 Training Materials - . reading mathematics science. overview. these training materials are based on the