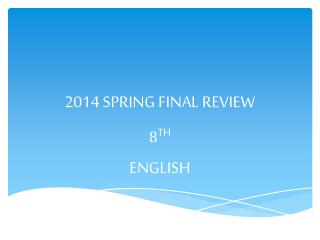 2014 SPRING FINAL REVIEW. 8 TH ENGLISH. COMPOUND SENTENCES. * C ontains two complete ideas called clauses *The clauses must be related. * C lauses are connected by a conjunction *A conjunction is a “joiner.” *Conjunctions: remember “FANBOYS” for, and, nor, but, or, yet, so Spring Semester Exam Review - . pap biology ---- mrs. adams. question 1. what are the chances that the offspring will

Spanish I Spring Final Review - . 125 multiple choice questions based around spanish i vocabulary and grammar. section-