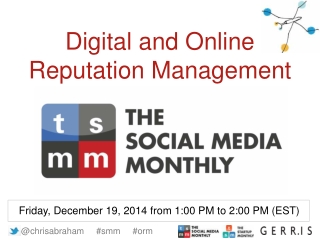 We invite you to join us online to learn about digital and online reputation management. December 19th, 2014 1pm - 2pm EST Online reputation management (ORM) is the practice of making people and businesses look their best on the Internet. To accomplish that, people need to control their online search results because they frequently contain inaccurate, misleading, or outdated material which can adversely influence how web searchers view them. Online reputation management is akin to defensive SEO. Presenter: Chris Abraham Chris Abraham is Gerris digital's founder and principal consultant. Gerris is a full-service digital strategy firm that reaches deeper into the conversation than any other agency anywhere. Gerris digital offers Internet and digital strategy consulting services. Gerris reaches deeper into the conversation online than any other agency anywhere. Chris is a leading expert in digital: search engine optimization (SEO), online relationship management (ORM), Internet privacy, and online public relations with a focus on blogger outreach, blogger engagement, and Internet crisis response and brings these skills and the skills of his partners, associates, and staff to Gerris. Have questions about Digital and Online Reputation Management? Contact The Social Media Monthly #I’m on Twitter. Now What? #How to Think About Social Media &amp; Brand Management - . about christina dennaoui.

SOCIAL MEDIA WORKSHOP - . intro. what is social media? impact of social media on consumers &amp; how it changes

Use Social Media in Branding For Best Result - For all those who think social media and seo works separately, well you

Why We Required Online Reputation Management for Our Business? - Keep in mind to have a proactive methodology about